Draft Day and We are Still Hostages of the Bounty Scandal 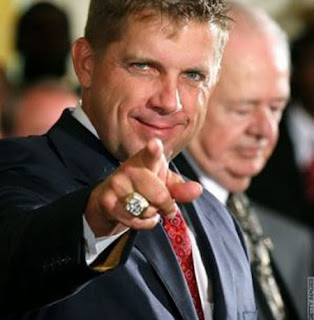 Tonight is the first round of the NFL draft. The Saints didn’t have a pick tonight before the bounty stuff started happening so it wasn’t going to be as exciting but I am thinking about not watching any of it. I already know that anytime my team name comes up there will be something negative attached to it.

I have accepted that the team was doing something it wasn’t supposed to. The coach is suspended for a year and I think that will cost the team a chance to play at home in the Superbowl. What Gregg Williams and the defense were doing was unnecessary and stupid. Even if it was just a motivational thing and they never really intended on hurting anyone they should have stopped it once the league told them too. Plus they broke one of the rules of doing something against the rules. You never let too many people in on what you are doing. Gregg Williams was making crazy speeches with all kinds of people in the room. As far as sports scandals go this is by far the dumbest one I have seen in my lifetime.

What is aggravating me is why it is taking so long to announce all of the punishments so we as fans can move on and start getting ready for our handicapped season.  The commissioner said he had 50,000 pages worth of documents in the investigation. There should have been more than enough information to suspend everyone involved and move on. At this rate we’ll have to listen to this over and over until minicamp starts. Why would the league continue to string this along and torture the fans if they already know what they are going to do? I have two theories.

The first one is that although no one has denied there was some kind of pay for performance system in place, there’s no actual video evidence that the players did anything on the field that warrants the suspensions that the commissioner has in mind. I think he’s been trying to get the players association to sign off on a heavy handed punishment like he gave to Sean Payton and they won’t do it without proof. Every news report has played the same two or three plays over and over.  They haven’t said if anyone got any money for those plays or not. It could be that they can’t prove anyone did so it’s hard to suspend a guy for half of the season for one hard hit that wasn’t even flagged on the field.

My other more irrational theory is that the commissioner is taking this long so the media can unleash an all out assault on Sean Payton and the organization. Until the bounty story started I had no idea just how much so many people in the media hated Sean Payton. No one is enjoying his suspension more than the guys that cover the team. A few days ago the reporter from Outside the Lines that broke the Loomis wiretapping story was on ESPN radio talking about it and he kept mentioning how Payton used to call and yell at reporters. I thought that was strange because Payton wasn’t the coach when the wiretapping supposedly happened. I think these last few weeks have been the media’s time to get back at the coach for being a jerk and the commissioner is letting it happen to take Sean Payton down a notch.

From a fan’s perspective, the longer this goes on the more I feel like the league is picking on the team and it makes me want to get back at them by running up the score on everyone we play and making it to the Superbowl anyway. I want to have another parade and let Sean Payton be the grand marshal leading the way holding the trophy.

In real life situations hate and bitterness can eat you alive. It’s debilitating. I wouldn’t recommend it. In sports it actually makes things more interesting. Years of bitterness and hate are what 2009 so sweet. The bitterness building towards the league is going to make 2012 a fun season because the team has nothing to lose after the bounty punishment. I just wish the commissioner makes his final ruling and get it over with it so we can get on with the task of building our villain dynasty. I can’t wait until September 9, 2012 when the Saints play their first home game of the season in which Sean Payton goes to the game in disguise, sits in the terrace and sends messages to the team using a coding system from the light shining off his Superbowl ring.  I know that won’t happen but I am sure a reporter will be up there looking for the next big Saints scandal.

Man, I go away for a (long) while only to come back and see that you've built a blogging empire. I hope all is well, my brother. Keep doing your thing.