A Lesson From Tiger 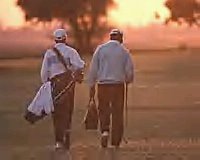 I’ve never been a big golf fan. Mostly because in my youth I viewed it as an elitist sport that no one from my neighborhood could afford to play. Then came Tiger Woods. Every time he is playing on the weekend I watch the tournament. I don’t watch for the golf though. I watch for the message in the story. I watch for the legacy of black fathers put on display at it’s best. I watch because even though I am just a working class brother, I totally understand Tiger’s sense of responsibility. Any black man with any admiration and respect for his daddy should watch and take pride in it too. See, every single weekend in front of millions of people around the world Tiger Woods shows his love for his daddy by the way he carries himself. Earl Woods spent years with his son practicing how to hit golf balls but during that time he also got him prepared to deal with the fact that whatever he accomplished on the course could be wiped out if he didn’t conduct himself in the right way. He had to make sure that he was such a man of character that people in country clubs that wouldn’t let his daddy take him to practice as a child would have no choice but to accept him and marvel at his ability. That’s what a man like that can give you. That’s what my daddy gave me. Honestly, there aren’t too many guys from my neighborhood that could deal with the different types of people I deal with on a day to day basis. Now I know it’s a partnership between parents and I am not trying to minimize what mama does. Most mamas do everything. I give all the love and respect to mom but I have to take time and give daddy his props. Black daddies hardly ever get all the butt kissing they deserve. They were interviewing Tiger Sunday between holes during the tournament and he said something that was very true. He said that everything his daddy said turned out to be right even if he didn’t think so when he said it. There are no truer words than that. For a father/son relationship there are three stages. The first stage is when you are a little boy and think everything he does or says is the greatest thing in the world. There’s almost a superhero quality to your daddy. The second stage is your teens and early 20’s when you just want him to leave you alone and look the other way so you can get into some things you shouldn’t. This is the time your daddy usually thinks something is wrong with you. Hopefully, if things go right you can get to the third stage which is when all the stuff he says starts to happen and fall into place. Dad goes back to being a genius and you both have a respect for one another as men. If you can give your son that then you should feel pretty good as a man. Here’s to all the brothers out there that have that connection.
Posted by Clifton at 8/22/2006 10:31:00 PM

The great thing about Tiger is that if he were not a Great Golfer, he would be that same man.